Sydney Leroux Net Worth: Sydney Leroux is a Canadian-American professional soccer player who has a net worth of $3 million. Sydney Leroux was born in Surrey, British Columbia, Canada in May 1990. Her mother played for the Canadian national softball team and her father pitched for the California Angels. Leroux spent her youth soccer career with Coquitlam City Wild, Sereno FC, and the UCLA Bruins.

She started playing professionally in 2005 for the Vancouver Whitecaps when she was the youngest player to ever play for the squad at 15. Sydney returned to play for the Whitecaps in 2011. She joined the Seattle Sounders Women in 2013 and the Boston Breakers in 2013. In 2014 Leroux joined the Seattle Reign FC of the National Women's Soccer League. She played internationally for Canada's Under-19 squad in 2004 but later started representing the United States on their Under-20 team from 2008 to 2010 and for the U.S. senior side since 2011. She won a Gold medal playing for the US at the 2012 London Olympics. She was drafted as the #1 pick by the Atlanta Beat during the 2012 WPS Draft before the league was suspended. Leroux won the FIFA U-20 Women's World Cup Golden Ball and Golden Shoe in 2008. She was featured in ESPN's The Body Issue in 2013. Leroux appeared in a commercial for Beats by Dre and has signed endorsement deals with Nestle Nesquick and BODYARMOR. 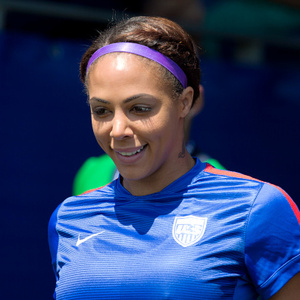