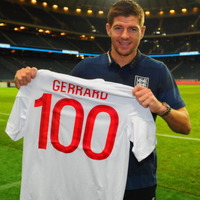 Steven Gerrard net worth and salary: Steven Gerrard is an English footballer who has a net worth of $90 million. Steven Gerrard has earned his net worth through his career playing Central mid-fielder/second striker in European soccer leagues. He has also served as captain of the Premier League club Liverpool. He was born in Whiston, Merseyside, England. Steven Gerrard's annual salary is $13 million. He also earns an estimated $4 million per year from endorsements with companies like Adidas, Lucozade, Mars. When you combine his salary and endorsements, Gerrard is one of the 20 highest paid soccer players in the world. Steven George Gerrard was born in Whiston, Merseyside, England in May 1980. Gerrard played his youth soccer for Liverpool from 1987 to 1998. He then was called up to Liverpool and has played there for his entire career. He became the squad's captain in 2003 and plays center midfield mainly. Gerrard has won two FA Cups, three League Cups, one Champions League, one EUFA Cup, two Community Shields, and two Super Cups. He played for England's Under-21 club for a year before being called up to the senior team. He has played in the 2006, 2010, and 2014 World Cups, as well as representing England in European Championships. In 2012 Gerrard became permanent captain of the English national team. He is third all-time in appearances for his country. He has been awarded with the UEFA Club Football of the Year and the Ballon d'Or Bronze Award. Gerrard has been part of the PFA Team of the Year eight times and the EUFA Team of the Year and FIFA World XI three times. He is the only person to score a goal in the FA Cup Final, a UEFA Cup Final, a Champions League Final, and a League Cup Final. He has been sponsored by Adidas, Xbox One, Jaguar Cars, and Lucozade.