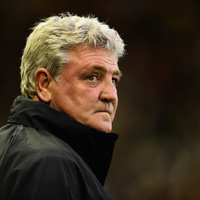 Steve Bruce Net Worth: Steve Bruce is an English football (soccer) manager and former player who has a net worth of $40 million. Born December 31, 1960 in Corbridge, England, Steve Bruce is currently the manager at Hull City. Having been initially turned down (as a player) by many pro clubs, including Newcastle United Sunderland, Derby County and Southport, the promising athlete was about to begin work as an apprentice plumber when he was offered a trial by Third Division club Gillingham, where Bruce spent the 1978-79 season on their reserve team. In his early playing career, he was known as an over-enthusiastic player, causing disciplinary issues, but later developed into a dependable, all-around player. In fact, in his prime as a player he became known for his calm and deliberate passing of the ball and his ability to control the ball under pressure. His first season as a manager was with Sheffield, though he resigned after only one season, citing turmoil and a shortage of funds. He has also managed for such teams as Huddersfield Town, Birmingham City, Wigan Athletic and Sunderland. On June 9, 2012, Bruce was appointed as manager Hull City, where he remains as of 2014.