Stan Collymore net worth: Stan Collymore is a retired English football (soccer) player and football pundit who has a net worth of $35 million. He played as a centre-forward from 1990-2001 and held the British transfer record when he moved from Nottingham Forest to Liverpool for £8.5 million in 1995. He was also capped three times at senior level by the England national football team.

Collymore was born in Stone, Staffordshire on January 22, 1971, and as a young boy supported Aston Villa. He caught the eye of several football league clubs before being given the chance to play as a full-time professional with Crystal Palace at the age of 19. During his career, he played for Crystal Palace, Southend United, Nottingham Forest, Liverpool, Aston Villa, Leicester City, Bradford City, Real Oviendo, and for the England team. He retired at the age of 30, on March 7, 2001 just five weeks after joining Real Oviendo. He believed it was the right time to start exploring other career opportunities, and although he was offered the chance to return to Southend United, as well as being approached by Boston United and Wolverhampton Wanderers, he never made a return to football and also turned down a manager's position at Bradford City. In 2005, he played the character of Kevin Franks in the film Basic Instinct 2 alongside Sharon Stone. He is also heard and seen regularly on television and radio in the UK, and owns Maverick Spirit Productions, a UK production company. In 2007, he pursued sports broadcasting full-time and reported for BBC Radio 5 Live from 2007-2008 for the Champions League Final between Manchester United and Chelsea. He left 5 Live after the 2008 Championships to become a presenter and commentator on talkSport and also works as an analyst on the station's matchday live program. Collymore had a relationship with Ulrika Jonsson that ended after he punched her in a Parisian bar in 1998. He later married Estelle Williams but the couple were divorced in 2007; Collymore was arrested after allegedly threatening to kill her and burn down her parent's house following the divorce. 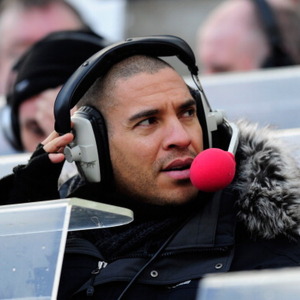