Shinji Kagawa Net Worth: Shinji Kagawa is a Japanese professional soccer player who has a net worth of $15 million. Today he is playing as a midfielder for the English club Manchester United and represents the Japan national team. Shinji was born in Kobe, Hyogo, Japan in 1989. He started playing soccer at the age of five when he joined Marino Football Club.

As a youth he also went on to play for Kobe NK Football Club and FC Miyagi. Kagawa signed a contract with Cerezo Osaka before he had even graduated high school. In 2009 Shinji was the top goal scorer of the J. League Division 2. In 2010 Kagawa transferred to Borussia Dortmund in Germany. As a goal-scoring midfielder, he then signed a four-year contract with famed club Manchester United. He became the first Japanese player to ever join the team. In March 2013 Shinji scored his first hat-trick, and became the first Asian player to do so in the Premier League. Kagawa has also played on the Japanese national team since 2008. He represented his home country in the 2008 Summer Olympics as well. Kagawa is known for his technical play and creativity. He handles himself well and has been praised for his decision making on the field. He is also known for his excellent passing abilities. 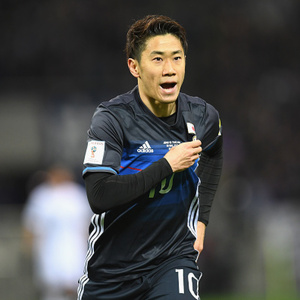