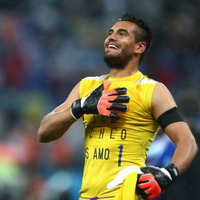 Sergio Romero net worth and salary: Sergio Romero is an Argentine football/soccer player who has a net worth of $8 million dollars. Sergio Romero is currently the goalkeeper for both the AS Monaco Football Club and for the Argentina National Team. While his professional achievements in club football/soccer have become idle over the last few years, his performance in the 2014 World Cup has arguably reinvigorated his career.  Romero initially joined the football club, Racing Club de Avellaneda and signed his first professional contract at the age of nineteen in 2006. He has represented Argentina at the 2007 South American Youth Championship, 2007 FIFA U-20 World Cup, 2010 FIFA World Cup, and the 2008 Summer Olympics when Argentina won the gold medal. Romero is Argentina's starting goalkeeper at the 2014 FIFA World Cup and in the semi-final, he earned himself the title of "Man of the Match" by saving kicks from Ron Vlaar and Wesley Sneijder during the match where Argentina defeated The Netherlands 4–2 in a penalty shootout to reach the 2014 FIFA World Cup Final. Romero was born and grew up in Bernardo de Irigoyen, Misiones, Argentina. His two older brothers became basketball players, but due to Sergio's smaller stature in comparison to them, Romero earned the nickname 'chiquito' which means little. He is married to Eliana Guercio, an Argentine model, vedette and actress. She is currently working in shows hosted by Gerardo Sofovich in Buenos Aires's Corrientes Avenue.