Sergio Ramos net worth and salary: Sergio Ramos is a Spanish football (soccer) player who has a net worth of $80 million dollars and annual salary of $25 million. Born in Camas, Spain, Sergio Ramos began playing in Sevilla FC's youth system, and made his La Liga debut in 2004. A year later, he began playing for Real Madrid.

The team paid 27 million euros for the then 19-year old player. With Real Madrid, he has established himself as an excellent defender with goal scoring skills that are unusual for players who have focused on defensive work. He established himself playing for Spain's Under-21 team in 2004, as well. He was a starter for Spain throughout the UEFA Euro 2008 qualifying campaign. He also played for Spain at the 2009 FIFA Confederations Cup. During the 2010 World Cup, he started every game, and finished tournament play with the #1 ranking on the Castrol Performance Index. He is a central defender and also plays as a right back. 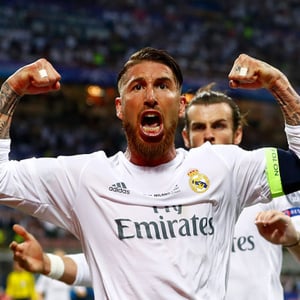