Sergio Busquets net worth and salary: Sergio Busquets is a Spanish football player who has a net worth of $45 million. He currently plays for both the Spanish national team and for FC Barcelona as a defensive midfielder. He was born in 1988 in Sabadell, Barcelona, Catalonia, Spain. His father, Carles, was also a football player and played as a goalkeeper for Barcelona for several years during the 1990s.

Busquets joined local FC Barcelona's youth ranks in 2005, scoring seven goals in 26 games for the Juvenil A Team in his second season. Two years later, he was promoted to the B-team, and in that same season would make his first-team debut when he came on as a substitute in a Catalonia Cup match. In 2008, Busquets signed a contract extension with FC Barcelona until 2013, with a buy-out clause of 80 million EUR. Also in 2008, Busquets earned his first cap for Spain's Under-21team during the 2009 UEFA European Under-21 Football Championship qualification play-offs in the first leg match against Switzerland. Then, in 2009, Busquets was called up to the senior squad for the friendly against England. He finally made his debut in a 2010 FIFA World Cup qualifier against Turkey, playing 16 minutes in a 2–1 win in Istanbul after replacing David Silva. He is currently one of the top players for Spainish team in the 2014 World Cup, and while he has never scored for Spain, Busquets consistently proves his worth has a skilled and majestic midfielder. 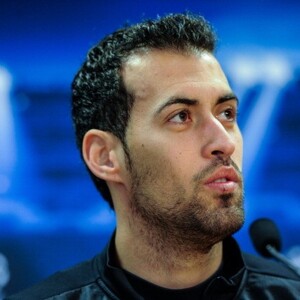