Samir Nasri net worth: Samir Nasri is a French soccer player who has a net worth of $22 million. He plays at the attacking midfielder and winger positions. Samir Nasri was born on June 26, 1987 in Marseille, France. He began his youth career with Pennes Mirabeau in 1995 before moving on to Olympique de Marseille in 1997 at the age of nine. He spent seven years training with the club's youth program La Commanderie, and in 2004 he joined Marseille's professional team. He scored 11 goals in 121 appearances with them. In 2008, he joined Arsenal, where he stayed until 2011, scoring 18 goals in 86 matches. Since 2011, he's been on Manchester City. Internationally, Nasri has played for the French professional team since 2007, and as a member of the Under-17 squad he won the UEFA European Under-17 Football Championship in 2007. Samir Nasri has also won a number of awards during his career: at the club level, he won the UEFA Intertoto Cup with Marseille in 2005; as a member of Manchester City he won the Premier League championship in 2011-12 and the FA Community Shield in 2012. Individually, Nasri has received the 2010-11 Premier League PFA Team of the Year honors, as well as the French Player of the Year in 2010. 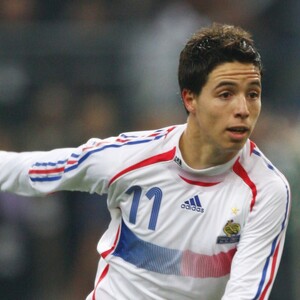