Sami Khedira net worth and salary: Sami Khedira is a German football player who has a net worth of $60 million. Khedira currently plays for both the German national team, and for Real Madrid. He moved to Real Madrid from VfB Stuttgart in 2010 and is known to be a dynamic midfielder who can cover a lot of ground, recover the ball, and quickly join in the team attack due to his powerful mid-range shooting.

Khedira was born in Stuttgart in 1987. His father is Tunisian and his mother is German. Sami's younger brother, Rani, is also a football player and currently plays for the first team of VfB Stuttgart; he is also a member of the Germany Under-17 team. Khedira has appeared 30 times in several German youth national teams, and he also captained the side during the European Under-21 Championship in 2009, where Germany won in the final against England. He was called up to the Germany squad for the 2010 World Cup in South Africa by coach Joachim Low, to fill in for injured Michael Ballack as defensive midfielder. He went on to play in all seven matches, and was only substituted twice. Khedira was in the starting lineup in eight qualification matches for Euro 2012, and helped Germany top their group with a record of ten wins out of ten matches. Khedira tore his ACL in his right knee in a friendly match against Italy in 2013; the injury has made his participation at the 2014 FIFA World Cup questionable, but the team remains optimistic. Khedira has been dating German fashion model, Lena Gercke, since May 2011. Both were featured in a February 2012 GQ cover story and are quite popular with the media. 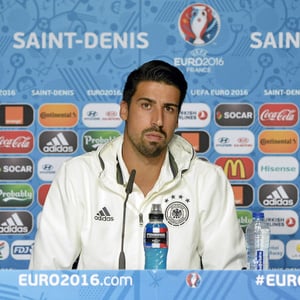