What is Sadio Mané's Net Worth and Salary?

Sadio Mané is a Senegalese professional football player who has a net worth of $25 million. Sadio Mane currently plays for the Premier League club Liverpool, where he earns and annual salary of 5 million GBP. Before this, he played with the Ligue 2 club Metz, the Austrian club Red Bull Salzburg, and the English club Southampton, where he set a Premier League record for the fastest hat-trick ever. Mané has also played extensively for Senegal on the world stage, and is tied for his country's top goalscorer.

Sadio Mané was born on April 10, 1992 in Bambali, Sédhiou, Senegal. Although his imam father forbade him from playing football, he chose to pursue a career in the sport nonetheless. At the age of 15, Mané left his home village and moved to Dakar to fulfill his career ambitions.

Referred by scouts to the association football club Génération Foot, Mané joined the partner club Metz in 2011. He went on to make his professional debut in January of the next year, coming on to replace Kévin Diaz in the 75th minute of a home loss against Bastia. Overall, Mané had 19 appearances in his first league season, and scored a single goal in a 2-5 loss to Guingamp.

In the summer of 2012, Mané moved to Red Bull Salzburg. With the club, he scored his first hat-trick in October; he scored another one a year later. Mané's final season with Salzburg ended with the team winning a domestic double. He subsequently forced a transfer by not showing up to training.

Mané transferred to Southampton in 2014 on a four-year contract. His debut was a 2-1 League Cup win over Arsenal, while his first league appearance was another 2-1 win over Queens Park Rangers. Mané went on to score his first goal for the club in a 1-0 victory over Stoke City, and then scored in three consecutive matches against Crystal Palace, Chelsea, and Arsenal. In May of 2015, Mané scored three times in under three minutes in the final Southampton home match of the season; this set a new record for the fastest hat-trick in the Premier League.

The 2015-16 season was rocky for Mané, as he was dropped from the starting lineup and failed to score for more than four months. However, he rebounded to score twice in a 3-2 win over Liverpool, which was followed by five goals over the next five matches. Mané finished the season as Southampton's top scorer, with 15 goals across all competitions. 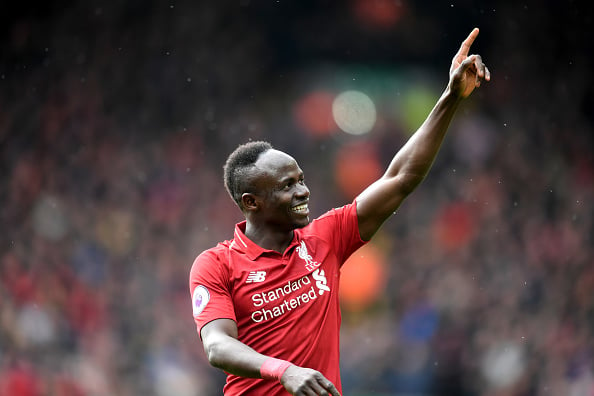 Mané joined Liverpool on a five-year contract in 2016. In his Premier League debut with the club, he scored the fourth goal in a 4-3 victory over Arsenal. Ultimately, he ended up scoring 13 league goals in his first season, and was named to the PFA Team of the Year. In the 2017-18 season, Mané scored his first hat-trick with Liverpool in a 5-0 win over Porto in the round of 16 of the UEFA Champions League. The next season was even more successful for Mané, as he became the Senegalese player to score the most goals in a single Premier League season, with 17. Moreover, he helped Liverpool win the 2019 UEFA Champions League Final over Tottenham.

In 2019, Mané scored twice in a UEFA Super Cup final win over Chelsea, and was named man of the match. Later, he made his 100th Premier League appearance for Liverpool, and scored his 50th league goal in a 2-1 victory over Leicester City. He went on to finish fourth place for the Ballon d'Or. More significantly, Mané helped Liverpool win the 2019 FIFA Club World Cup. He continued his success in 2020, helping Liverpool clinch the Premier League title to end its 30-year drought. The next season was less great, as Mané tested positive for COVID and had inconsistent form. He bounced back for the 2021-22 season, scoring both his 100th Liverpool goal and his 100th Premier League goal. In the process, Mané became only the third African player to reach the latter mark.

On the global stage, Mané played for the Senegal national team in the 2012 Summer Olympics in London, where they fell to eventual champions Mexico in the quarterfinals. In 2018, he played for his country's 23-man squad in the FIFA World Cup; the team was eliminated after the first stage. Mané has also played in multiple Africa Cup of Nations tournaments. In 2019, he and Senegal finished in second to Algeria. They had better success in 2021, winning the competition for the first time against Egypt. In the final, Mané scored the kick that clinched the trophy, and was consequently named the player of the tournament.

Mané is a practicing Muslim. He lives in Allerton, Liverpool, England.

On the philanthropic side of things, Mané donated £250,000 for the construction of a school in his hometown of Bambali in 2019. Two years after that, he donated £500,000 toward the building of a hospital there. 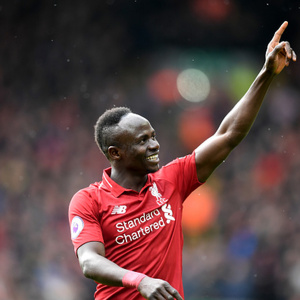