Romelu Lukaku Net Worth: Romelu Lukaku is a Belgian professional soccer player who has a net worth of $20 million. Romelu Lukaku was born in Antwerp, Belgium in May 1993. Lukaku played his youth soccer with Rupel Boom from 1999 until 2003 and then for KFC Wintam from 2003 to 2004. He played with Lierse from 2004 to 2006 and then for Anderlecht from 2006 until 2009 when he was called up to their senior side.

He played there until 2011 when he joined Chelsea for a fee reported at about $12 million pounds. While with Chelsea Lukaku was loaned to West Bromwich Albion from 2012 to 2013 and to Everton from 2013 to 2014. In 2014 he signed full time with Everton for a five year deal with a record free of $28 million pounds. Romelu also represents Belgium in international competition and has played on their Under-15, Under-18, and Under-21 teams and joined their senior side in 2010. Lukaku was named one of the ten most promising young players in Europe by The Guardian in January 2014. He won the Belgian Pro League in 2009-10 with Anderlecht and the FA Cup in 2011-12 with Chelsea. Lukaku was the Belgian First Division Top Scorer for 2009-10 and won the Belgian Ebony Shoe in 2011. 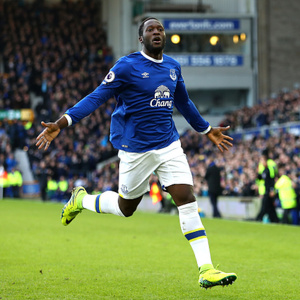