Robinho net worth and salary: Robinho is a Brazilian professional footballer who has a net worth of $60 million. Robinho is probably most famous for playing the position of striker for Serie A club Milan, and as a member of the Brazilian national team. He was born on January 25, 1984 in Sao Vicente, Sao Paulo State, Brazil Robinho was personally picked by Brazil legend Pele his heir apparent, in 1999 at the age of 15.

Robinho went on to lead Santos to their first Campeonato Brasileiro title, Pelé himself played for the club. He won another title with Santos and two more with Spanish club Real Madrid. He has also won the Italian Serie A title his first season at AC Milan. Robinho has won one Copa America title and two Confederations Cups with Brazil. He was 18 when he signed his first professional contract with Santos in Brazil, during that season he made 24 appearances, and scored 1 goal as Santos won the 2002 Campeonato Brasileiro. Later in 2004, Robinho finished with 21 goals in 37 games and led Santos to win another Campeonato Brasileiro. Robinho's mother Marina da Silva Souza, was kidnapped by gunmen at her Praia Grande home on November 06, 2005 however, she was released unharmed six weeks later after a ransom was paid. In July 2005, Robinho moved on to become a member of Spanish giants Real Madrid C.F, after the club agreed to pay a fee equal to 60 percent of the buyout clause in his contract belonging to Santos. During his first season with Madrid he made 37 appearances and scored 14 goals that earned him the shirt number 10, previously worn by Luis Figo. During his Madrid years Robinho was the third highest scorer, behind strikers Raul and Van Nistelrooy. Robinho has been married to Vivian Guglielmetti since 2009, the couple has two sons. 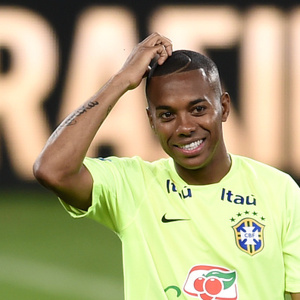