Robin van Persie Net Worth and salary: Robin van Persie is a famous Dutch football player who has a net worth of $50 million. Robin van Persie earns an annual salary of $16 million plus an additional $3 million from endorsements. Van Persie can now be seen as a striker for both Manchester United and the Dutch national football team.

Born on 6 August 1983 in Rotterdam, Netherlands, Persie joined SBV Excelsior at the age of five, but left the team at the age of 15 to move to Feyenoord. Thus, he was quickly placed in the first team, marking his debut with a win of the KNVB (Royal Dutch Football Association) Best Young Talent award in 2001-02 season. This feat secured him a three-and-a-half year professional contract for Feyenoord, with whom he won the UEFA Cup in 2002. Two years later, Robin van Persie joined Arsenal for $4.5 million, and became a captain of the team in 2011. In his first season for Arsenal, Persie won the FA Cup and FA Community Shield. Also, he has been appointed Premier League Player of the Month for three times. Moreover, Van Persie was a Dutch youth international player, having representing his country for under-17, under-19 and under-21 teams. So far, he has scored 41 goals and has 78 caps for the Netherlands, which makes him top scorer in the country. Van Persie represented the Dutch national team in 2006 FIFA World Cup, UEFA Euro 2008, the 2010 FIFA World Cup and UEFA Euro 2012. On 7 June 2013 Robin van Persie became captain of the national team. It was on 15 August 2012 that Van Persie transferred to Manchester United for $37 million. 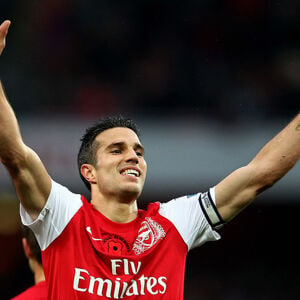