Roberto Mancini Net Worth: Roberto Mancini is an Italian football (soccer) manager and former footballer who has a net worth of $45 million. Born November 27, 1964, in Iesa, Italy, Roberto Mancini is most notable, in terms of being a player, for his time with Sampdoria where he played more than 550 matches and was instrumental in the team winning the Serie A league title, four Coppe Italia and the European Cup Winners' Cup. He made his international squad debut in 1984 against Canada and won 36 caps and scored four goals for his country. In 1997, he left the club to join Lazio where he won Scudetto, Cup Winners' Cup and two more Coppe Italia. Mancini's first managing position was at Florentina where he won a Coppe Italia. Not long after, he took over as manager of Lazio. Mancini has garnered over 25 trophies (13 as a player and 12 as a manager). His training methods have been publicly criticized and it has been alleged that Mancini had less than warm relationships with footballer Craig Bellamy, club physiotherapist Jamie Murphy and Togolese Emmanuel Adebayor, who was disgruntled at not making first team football. Though, as of 2014, Mancini was without a team, he continues his tradition of wearing a scarf which displays his club's colors. 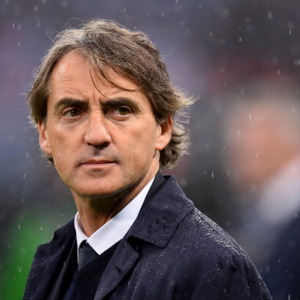