Roberto Firmino was born in Maceio, Brazil in October 1991. He is a forward and attacking midfielder who spent his youth career with CR from 2004 to 2008 and Figueirense from 2008 to 2009. Firmino joined Figueirense's senior side from 2009 to 2011 where he had eight goals in 38 appearances. He played for 1899 Hoffenheim from 2011 to 2015, scoring 38 goals in 140 caps. Roberto Firmino joined Liverpool in 2015 and has scored more than 55 goals in over 165 games. He has also represented Brazil in international competition starting in 2014, scoring more than a dozen goals in over 40 games. Firmino won the UEFA Champions League in 2018-19 and the UEFA Super Cup and FIFA Club World Cup in 2019. He won the Copa America in 2019. 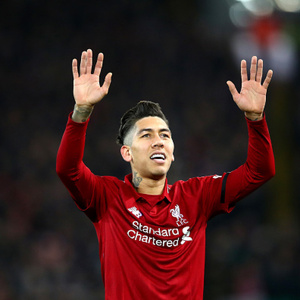