Roberto Baggio Net Worth: Roberto Baggio is an Italian retired professional soccer player who has a net worth of $15 million. Roberto Baggio was born in Caldogno, Italy in February 1967. He was a second striker and attacking midfielder who started his senior career in 1982 for Vicenza. He is considered to be one of the best players of all time and finished fourth in the FIFA Player of the Century internet poll and made the FIFA World Cup Dream Team.

He was the FIFA World Player of the Year in 1993 and also won the Ballon d'Or. Baggio was named as one of the FIFA 100 world's greatest living players in 2004. During his career he played for Vicenza, Fiorentina, Juventus, Milan, Bologna, Internazionale, and Brescia. He also represented Italy in international competition from 1999 to 2004 before retiring. He finished as Italy's fourth highest goal scorer. In the 1990 FIFA World Cup he helped Italy finish third and at the 1994 FIFA World Cup Italy made it to the final and Baggio received a World Cup Silver Ball and was named to the World Cup All-Star Team. He is the only Italian player to score in three World Cups. He scored more than 300 goals and has won two Serie A titles, a UEFA Cup, and a Coppa Italia. He has been a Goodwill Ambassador for the Food and Agriculture Organization for the United Nations and was the inaugural Golden Foot award winner. He has also received a Man of Peace award from the Nobel Peace Prize Laureates and was inducted into the Italian Football Hall of Fame. He also served as the President of the technical sector of the Italian Football Federation. 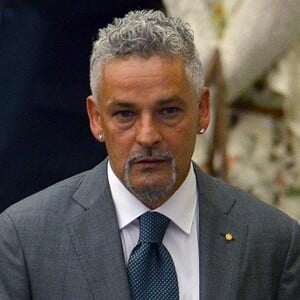