Ricardo Pelaez Net Worth: Ricardo Pelaez is a Mexican retired professional soccer player who has a net worth of $5 million. Ricardo Pelaez was born in Mexico City, Mexico in March 1963. He was a striker who made his professional debut for Club America in 1985. Before playing soccer Ricardo worked as an accountant. In 1987 he joined Necaxa where he played until 1997. During this time he had 352 appearances and scored a Necaxa record 138 goals. He went back to Club America from 1997 to 1998 before finishing his career with Guadalajara from 1998 to 2000. Over his professional career Pelaez appeared in 444 matches and scored 170 goals. He also represented Mexico in international competition from 1989 to 1999. He played in the 1998 FIFA World Cup for Mexico and scored two goals. He made 43 appearances and scored 16 goals for his home country. Ricardo became a soccer commentator for the Mexican television station Televisa in 2004. He has also been a Spanish language commentator for the FIFA video games. He briefly served as Sporting Director of the Mexican national team and is the current President of Liga MX club America. 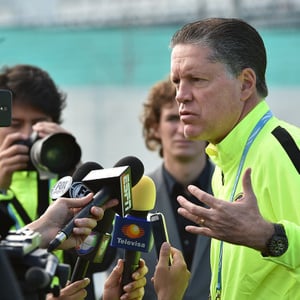