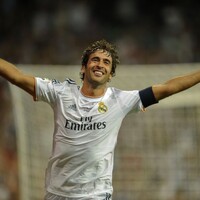 Raúl González Blanco net worth: Raúl González Blanco is a Spanish former professional soccer player who has a net worth of $100 million. Raúl González Blanco was born in Madrid, Spain in June 1977. He was a striker who played his youth career for San Cristobal, Atletico Madrid, and Real Madrid. Blanco made his senior debut for Real Madrid C in 1994 and also played for Real Madrid B before playing for Real Madrid from 1994 to 2010. During that time Blanco scored 228 goals in 550 appearances. He played for Schalke 04 from 2010 to 2012 where he scored 28 goals in 66 caps. Blanco played for Al Sadd from 2012 to 2014 and scored 11 goals in 39 games. He finished his career with the New York Cosmos from 2014 to 2015, scoring eight goals in 28 appearances. Blanco also represented Spain in international competition at the Under-18, Under-20, Under-21, Under-23, and senior levels, scoring 44 games in 102 caps. Blanco has won six La Liga titles and three UEFA Champions League titles. In 2001 Blanco won the Ballon d'Or Silver Award and the FIFA World Player of the Year Bronze Award.