Raheem Sterling net worth: Raheem Sterling is an English professional soccer player who has a net worth of $45 million. Raheem Sterling was born in Kingston, Jamaica in December 1994. He is a winger and attacking midfielder. Sterling spent his youth career with Queens Park Rangers from 2003 to 2010 and Liverpool from 2010 to 2012.

He joined Liverpool's senior side from 2012 to 2015 where he scored 18 goals in 95 appearances. Raheem Sterling joined Manchester City in 2015. He has also represented England in international competition at the under-16, under-17, under-19, under-21, and senior levels. His transfer fee to Manchester City was the highest ever for an English player and he helped the club win the Premier League in 2018. He played for England in the World Cup in 2014 and 2018. Sterling was Premier League Player of the Month in August 2016 and named Golden Boy in 2014. 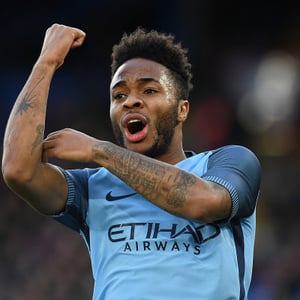