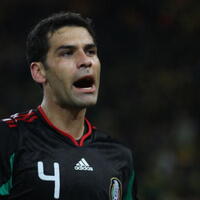 Rafa Marquez net worth and salary: Rafa Marquez is a Mexican football (soccer) player who has a net worth of $25 million dollars. Rafa Marquez is currently playing as a central defender or a defensive midfielder for León of the Liga MX and the Mexico national team. He began his career in 1996 with Atlas and moved to France in 1999 to join AS Monaco, where he won the league title. In 2003 he transferred to FC Barcelona and won many championships with the team, including four La Liga titles, three Supercopa de España cups, two Champions League titles, and one Copa del Rey, UEFA Super Cup and FIFA Club World Cup trophy. In 2006, he became the first Mexican player to win the UEFA Champions League when Barcelona defeated Arsenal in 2006. In 2010, Marquez joined the New York Red Bulls, where he was a controversial figure. After being released from the club in 2012, he moved back to Mexico, this time to play for Club León. Since making his international debut for the Mexican national team in 1997 against Ecuador, Marquez has been a regular selection of the Mexico team, though he was not chosen for the 1998 FIFA World Cup squad. Marquez has played various tournaments with the Mexican team, winning the 1999 FIFA Confederations Cup and the 2000 CONCACAF Gold Cup. He has been Captain of the Mexican national team since 2002. In the 2014 World Cup, Marquez made history by becoming the first player ever to captain his national side in four consecutive editions of the FIFA World Cup.  Marquez married Mexican actress, Adriana Lavat, in December 2001 and the couple had two children, Santiago Rafael and Rafaela, before separating in 2007 and divorcing. He is now married to Jaydy Michel, ex-wife of singer Alejandro Sanz.