Rafa Benitez Net Worth: Rafa Benitez is a former Spanish football player and current manager who has a net worth of $30 million. Rafael Benitez Maudes was born in Madrid, Sprain, in 1960, and played football when he was a kid. He was part of the Real Madrid academy and was chosen for the Spain Youth U-19s team.

Benitez made his senior career debut in 1974 with Real Madrid Castilla, playing in 247 matches and scoring seven goals. He played with Guardamar on loan in 1981 before singing with Parla from 1981 until 1985. He retired from playing in 1986 after a season with Linares, finishing his career with 405 appearances and 22 goals. The sweeper began his managerial career with Real Madrid. He managed Real Madrid B from 1993 until 1995, before bouncing around from Valladolid to Osasuna to Extremadura to Tenerife. He managed Valencia from 2001 until 2004 before landing a job with Liverpool from 2004 until 2010. He served as the manager of Internazionale during the 2010 season before becoming the interim manager with Chelsea from 2012 until 2013. In 2013, he started managing Napoli, where he currently works. Benitez helped Liverpool win the 2005 UEFA Champions League. He was part of the 2006 FA Cup-winning team and appeared in the finals of the 2007 Champions League. While interim managing Chelsea, Benitez won the 2013 Europa League title. He has been married to his wife, Maria de Montserrat, since 1998. They have two daughters together. 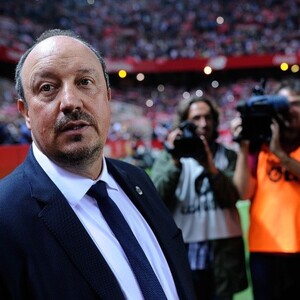