Pierre-Emerick Aubameyang was born in Laval, France in June 1989. He is a striker who started his youth career with ASL L'Huisserie Football and also played for Nice, Laval, Rouen, Bastia, and Milan. Aubameyang joined Milan's senior team from 2008 to 2011. During that time he was loaned to Dijon from 2008 to 2009 where he scored eight goals in 34 appearances. He was loaned to Lille from 2009 to 2010, scoring two goals in 14 caps. Pierre-Emerick Aubameyang was loaned to Monaco from 2010 to 2011 and scored a pair of goals in 19 games and he also scored two goals in 14 games being loaned to Saint-Etienne in 2011. Aubameyang joined Saint-Etienne from 2011 to 2013 and scored 35 goals in 73 appearances. He played for Borussia Dortmund from 2013 to 2018 and scored 98 goals in 144 caps. He joined Arsenal in 2018. Pierre-Emerick Aubameyang represented France in international competition at the under-21 level before representing Gabon at the under-23 level and for their senior side where has scored 25+ goals. He has been Bundesliga Player of the Year, African Football of the Year, and more. 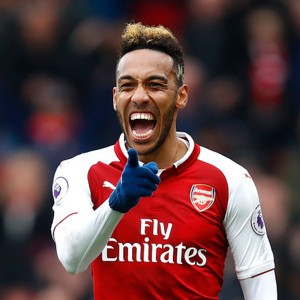