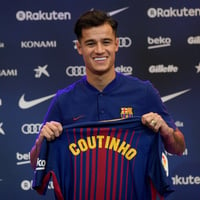 Philippe Coutinho net worth: Philippe Coutinho is a Brazilian professional soccer player who has a net worth of $60 million. Philippe Coutinho was born in Rio de Janeiro, Brazil in June 1992. He is an attacking midfielder and winger who spent his youth career with Vasco de Gama. Coutinho played for Internazionale from 2008 to 2013. During that time, he was loaned to Vasco de Gama from 2008 to 2010 and to Espanyol in 2012. He joined Liverpool in 2013 and played there until 2018 where he scored 41 goals in 152 appearances. Philippe Coutinho joined Barcelona in 2018. He has also represented Brazil in international competition at the under-17, under-20, and senior levels. With Vasco de Gama he won the Campeonato Brasileiro Serie B in 2009. Philippe Coutinho won the Coppa Italia and Supercoppa Italiana with Internazionale. With Brazil he won the South American Under-17 Football Championship, the FIFA U-20 World Cup, and the Superclasico de las Americas. Coutinho has also won the PFA Fans' Player of the Month, UEFA Europa League Squad of the Season, Samba Gold Award, Football Supporters' Federation Player of the Year, and more.