Philipp Lahm net worth and salary: Philipp Lahm is a German football player who has a net worth of $100 million. He plays as a full back and a defensive midfielder for both the German national team, and for Bayern Munich; he is also the captain of both teams. Lahm is considered one of the best full backs of his generation, and was included in the World Cup teams in 2006 and 2010, the UEFA Team in 2008 and 2012 and in the UEFA Team of the Year 2006, 2008, 2012 and 2013.

Although Lahm is right-footed, he is able to play on both sides of the field. He is known for his pace, his dribbling, and his precise tackling abilities. Lahm is also known for his small stature, with a height of 5 feet 7 inches, causing both fans and teammates to give him the nickname the "Magic Dwarf". Lahm missed more than a year of international football between January 2005 and March 2006 due to injuries (stress-fracture on foot and a torn cruciate ligament), including the Confed Cup 2005, but after his recovery he immediately made it back to the starting line-up. He scored the first goal in the opening game of the World Cup in Germany against Costa Rica in the sixth minute and was awarded Man of the Match for his performance in the second group game against Poland. He was also the only German player to play the complete 690 minutes of the World Cup and was also elected to the All Star Team of the tournament. During the Euro 2008 he was in Germany's starting line-up in all games and was only substituted in the final after getting a cut that required him to get stitches on his foot. Lahm started the tournament as a right back but replaced Jansen as left back mid-way through the second game. In the 2010 World Cup, Lahm was the only player to play every single minute. Following the withdrawal of regular captain Michael Ballack from the World Cup squad due to injury, Lahm was chosen to captain the team at the upcoming tournament.

He also had a strong presence as both a captain and a player during the Euro 2012 tournament, and his solid defending helped German win all ten qualification matches. Lahm also scored the opening goal in their 4-2 victory over Greece in the quarter finals. Lahm married his longtime girlfriend, Claudia Schattenberg, in the Munich suburb of Aying, just four days after Germany won third place in the 2010 FIFA World Cup. The couple welcomed their first son, Julian, in August of 2012. 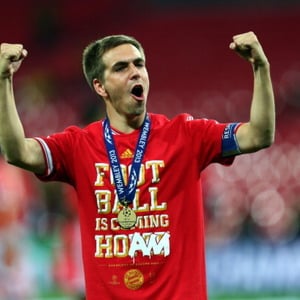