Petr Cech net worth and salary: Petr Cech is a Czech football player who has a net worth of $36 million. Petr Cech is the goalkeeper for both the Czech national team and the English Premier League club team, Chelsea. He is the second most capped player in the history of the Czech national team with 107 caps, and represented the country at the 2006 World Cup, as well as the 2004, 2008 and 2012 European Championships.

He was voted into the Euro 2004 all-star team after helping the Czechs reach the semi-finals and also received the individual award of Best Goalkeeper in the 2004–05, 2006–07 and 2007–08 seasons of the UEFA Champions League. He is considered to be one of the best and most respected goalkeepers of his generation. He joined Chelsea in 2004 and to date, has made over 450 appearances for the club, putting him sixth in its all-time appearances list. With Chelsea, Cech has won three Premier League titles, four FA Cups, three Football League Cups, one UEFA Europa League and one UEFA Champions League. He holds a number of goalkeeping records, including the Premier League record for fewest appearances required to reach 100 clean sheets, and he achieved that in 180 league appearances. Cech also holds a Czech professional league record of not conceding a goal in 903 competitive minutes. Čech was born a triplet along with sister Šárka and a brother named Michal, who died aged two after contracting an infection in hospital; he also has an elder sister, Marketa. Cech is one of the last generation of footballers to have grown up under Communism, to have witnessed the convulsions in Eastern Europe brought about by the disintegration of Soviet power. Cech married Martina Dolejsova who is also of Czech nationality, in June 2003, and they have a daughter Adela and a son Damian. In 2006, he suffered a life-threatening head injury on the football grounds during a clash with Reading's Stephen Hunt. His skull is thinner than average, likely due to him being a triplet, and because of this injury, he wars a rugby-style helmet to protect his head during matches. 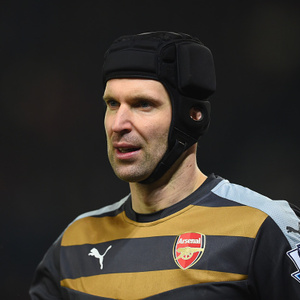