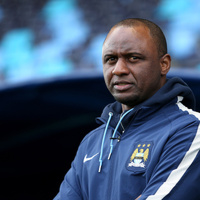 Patrick Vieira net worth: Patrick Vieira is a retired French footballer who has a net worth of $33 million. He currently serves as the Manager of the Reserves squad of the Premier League club Manchester City, known as the Elite Development Squad. Patrick Vieira was born in Dakar, Senegal on June 23, 1976. He made his soccer debut at age 17 for AS Cannes, and captained the team by the age of 19. In 49 appearances with AS Cannes, Vieira scored two goals, and in 1996 he joined Arsenal. He scored his first goal for the club in a December match against Derby County, the late equalizer of a 2-2 draw. Despite receiving several red cards throughout his tenure at Arsenal, Vieira put together a solid ten year career, leaving the club in 2005 with 249 appearances and 29 goals. In the 2000-01 season, he won both the Premier League Player of the Season and French Player of the Year. After leaving Arsenal, Vieira joined Juventus, scoring five goals in 31 appearances. In 2006 he left to become a part of Internazionale, where he scored six times in 67 appearances, and won the Italian Super Cup in 2006. Finally, in 2010, Manchester City welcomed Vieira, and he netted three goals in 28 matches. Since retiring from playing in 2011, Vieira has acted in a training and youth management setting for various up-and-coming Manchester City squads.