Pablo Zabaleta Net Worth and salary: Pablo Zabaleta is an Argentine professional soccer player who has a net worth of $18 million. He was born as Pablo Javier Zabaleta Girod in 1985 in Buenos Aires, Argentina. He started off in 1995 by playing for Obras Sanitarias at the age of 12. He then played for San Lorenzo as a defensive midfielder from 1997 to 2002.

Eventually Zabaleta moved to the right side of the midfield. After playing in the youth ranks Pablo was called up the senior squad for San Lorenzo until 2005. He was then transferred to RCD Espanyol for $3 million in 2005. He played a full match of 90 minutes and helped the team with the Copa Del Ray in 2005-06. In 2008 Zabaleta transferred to Manchester City of the Premier League. His transfer is believed to have been for about $6.45 million. Pablo has played for Argentina's nation team since 2003. He played all six matches in the 2008 Beijing Olympics, in which Argentina won the gold medal for soccer. He captained the team in June 2011 against Nigeria. Pablo's mother died when he was 15 and he got a tattoo on his chest with her name. He is married to Christel Castano. 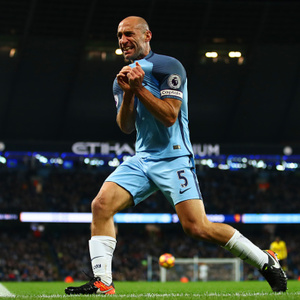