Oscar dos Santos Emboaba Net Worth and salary: Oscar dos Santos Emboaba is a Brazilian football player who has a net worth of $70 million. Born in Sao Paulo, Brazil, in 1991, Oscar dos Santos Emboaba is an attacking midfielder and winger for Chelsea of the Premier League. He is also a member of Brazil's national team. Oscar made his professional debut when he was 17 with Sao Paulo, but left for Internacional after claiming his original club did not pay him properly. After a lengthy legal process, Oscar was free to play for Internacional, but he signed with Chelsea a year later in 2012. Oscar is an international star for Brazil. He is the first player to record a hat trick during the FIFA Under-20 World Cup Final, played during the 2012 London Olympics and was part of the Brazilian team that defeated Spain to win the 2013 Confederations Cup. Oscar has posed for Calvin Klein as an underwear model and is married to his wife, Ludmila. The couple will welcome their first child in 2014. Between June 2017 and June 2018, Oscar earned $30 million between salary and endorsements which was enough to make him one of the highest paid football players in the world.

Contracts: Oscar became world famous playing for Chelsea. In 2017 he shocked the world when he announced a new deal with Shanghai SIPD of the Chinese Super League. His contract pays $26.5 million over four years. Perhaps it's not so shocking when you consider the deal quadrupled his former Chelsea salary. It's a big enough contract to make Oscar one of the 10 highest-paid soccer players in the world. 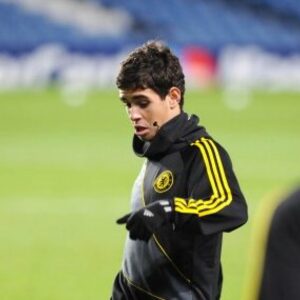