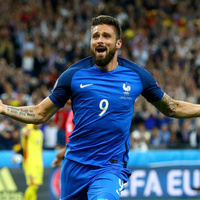 Olivier Giroud Net Worth: Olivier Giroud is a French professional soccer player who has a net worth of $10 million. Olivier Giroud was born in Chambery, France in September 1986. He played his youth career for Froges and Grenoble. Giroud was called up to Grenoble's senior side in 2005. Giroud is a striker and is known for his size and physicality. During his time at Grenoble he was loaned to Istres. He played with Tours from 2008 to 2010 and then for Montpellier from 2010 to 2012 but was loaned back to Tours. Giroud signed with Arsenal in 2012 for $9.6 million pounds. His was the division's top scorer in his second season with Tours. He was again the top scorer in the 2011-12 season with Montpellier and helped the club win their first ever Ligue 1 title. With Arsenal he won the FA Cup in 2013-14 and the FA Community Shield in 2014. Giroud was named UNFP Player of the Month twice in 2009 and was also named UNFP Ligue 2 Player of the Year in 2009-10. He has also represented France in international competition since 2011. He reached the quarter-finals at both the UEFA Euro 2012 and the 2014 FIFA World Cup.