Oguchi Onyewu Net Worth and salary: Oguchi Onyewu is an American footballer (soccer player) who has a net worth of $18 million dollars. Born May 13, 1982 in Washington, D.C., he is a central defender for Championship side Sheffield Wednesday and the United States national team. Onyewu played two years of college soccer at Clemson University (South Carolina) then moved to Europe in 2002 and signed with Metz of Ligue 2 in France.

He went on to play for La Louvière in Belgium then played for Standard Liège a year later. He was voted U.S. Soccer Athlete of the Year in December of 2006 and was the first defender to earn that award since Alexi Lalas in 1995. Onyewu also played for England's Premier League, Italy's Serie A, Netherlands' Eredivisie, Portugal's Primeira Liga and England's Championship League. In a World Cup qualifier draw against Costa Rica in 2009, he suffered a patellar tendon rupture and he missed the rest of the qualifying. Onyewu speaks English, French, Italian and Portuguese. He is a practicing Catholic. At 6′ 4″ tall, he is the second-tallest outfield player in U.S. team history (after Omar Gonzalez). 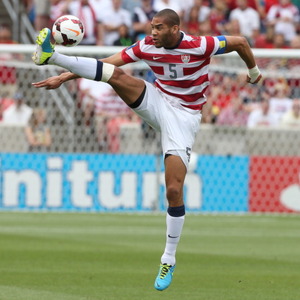