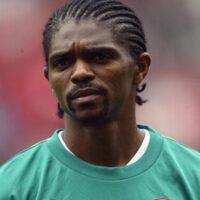 Nwankwo Kanu net worth: Nwankwo Kanu is a Nigerian retired professional soccer player who has a net worth of $9 million dollars. Nwankwo Kanu was born in Owerri, Nigeria in August 1974. He started his career in 1992 for Iwuanyanwu Nationale. In 1993 Kanu started playing for the Nigerian national team. In 1993 he was signed my Dutch team Eredivisie AFC Ajax for just over $200,000 Euro. During the club's 1995 Champions League final win he came on as a sub. Kanu was sold to Internazionale from Serie A in 1996 for about $4.7 million. Also in 1996 Kanu was the captain of the Nigerian team that won gold at the Olympics. He was named the African Footballer of the Year. After the Olympics it was discovered that Kanu had a serious heart defect and he had to undergo surgery to replace an aortic valve. After a year off he returned to soccer. He played for Arsenal from 1999 to 2004 and was signed for about $4.15 million pounds. In 1999 he was once again named African Footballer of the Year. Kanu played for West Bromwich Albion from 2004 to 2006 and then finished his career with Portsmouth from 2006 to 2012. In 1993 he led Nigeria to win the FIFA U-17 tournament in Japan.