Nemanja Vidic Net Worth: Nemanja Vidic is a Serbian footballer and captain of the English Premier League club Manchester United who has a net worth of $14 million. Before becoming a global star as a part of the Manchester club, Vidic has initially established himself at Red Star Belgrade back in the early 2000s. Throughout the rest of the decade, he also played for the Serbian national team. Born on the 21st of October in 1981 in Titovo Užice, SFR Yugoslavia, he would eventually go on to take his career a step further as one of the key members of the "Famous Four" Serbian national team defense that earned that moniker by giving away a toal of only one goal during the entire 2006 FIFA World Cup qualification campaign. In January of 2006, Vidic joined up with Manchester United, earning a fee of £7 million in the process. At the time, he had already formed a prominent defensive partnership with Rio Ferdinand and enjoyed a healthy reputation as a very bankable player who came with both defensive consistency as well as situational awareness on the field. Over the course of his career with United, Vidic has garnered a great number of honors and accolades. These include three  Premier League titles in a row, the UEFA Champions League championship, the FIFA World Club Cup and three League Cup medals. As if that weren't enough, he was also included in three consecutive PFA Team of the Year sides, as well as he assisted United to a new record-setting run of 14 subsequent clean sheets and was also named the Barclays Player of the Season. Also having fetched the club's Fans' and Players' Player of the Year awards, Nemanja Vidic was then recently selected to serve on the Manchester United team as captain at the beginning of the 2010-2011 season 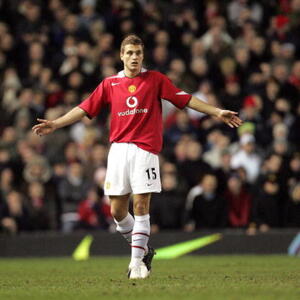