Mohamed Salah Net Worth and Salary: Mohamed Salah is an Egyptian professional soccer player who has a net worth of $90 million. Also known as the "Egyptian King" or "The Pharaoh," Salah is considered one of the best strikers in the modern game of football. Although Salah started his career in Egypt, he quickly attracted attention from international clubs. His career has taken him across Europe, and he has become an integral player in both the Italian and English leagues.

Salah has been an important player for Liverpool, and it was after he moved to this club that he started to become a major international figure. He helped this English club win the Champions League and the league title. Outside of his club activities, Salah has led the Egyptian national team to new heights. He is seen as a national hero in his home country.

Early Life: Mohamed Salah Hamed Mahrous Ghaly was born on June 15th of 1992 in Nagrig, Basyoun, Egypt. Mohamed was raised in a Muslim household alongside his brother, Nasr. At the age of 7, Salah started to become serious about football, and he grew up watching Champions League games on television.

Career: Salah started his career with El Mokawloon, a team in the Egyptian Premier League. His debut came in 2010, and he continued to perform well throughout his first season. After scoring a few goals for the team, he earned a place on the starting 11. In 2012, much of the Egpytian league was canceled due to the Port Said Stadium riot.

Because the season was suspended, the Swiss team Basel took the opportunity to offer Salah a place on their squad. Basel had been closely monitoring Mohamed's progress, and in 2012 the Egyptian King signed a four-year contract and joined the Swiss Super League. Salah then scored on his debut before following up with a range of impressive performances. During this first season with Basel, Salah led the team to a win against Tottenham at the Europa League.

After beating the North London side, Basel advanced to play Chelsea. Although the Swiss team lost the game, Salah caught the eye of Chelsea's management personnel. Basel ended the season with a comfortably-won league title. After another successful season at Basel, Salah would meet Chelsea once again during the group stage of that year's Champions League. Salah scored against Chelsea in both ties, which convinced the West London side that Salah was a worthwhile investment.

In 2014, Salah signed for Chelsea with an 11-million-pound transfer fee during the January transfer window. Salah started his career at Chelsea as a substitute, and he scored a few goals during the 2013-2014 season. During the next season, Salah's future was in doubt after it became known that he was legally obligated to complete military service in Egypt. However, he met with the Egyptian Prime Minister, who made an exception for him.

That being said, Salah didn't see much game time that season – even after being saved from military service. Jose Mourinho didn't seem to rate him highly, and so Salah moved to Fiorentina in 2015 on a loan deal. He immediately made an impact for Fiorentina, scoring regularly and leading his team to another win against Tottenham at the Europa League.

Even though he had certainly made his mark in the Italian league with Fiorentina, Salah had bigger plans. He forced another loan deal to Roma for 5 million Euros, although technically he was still a Chelsea player. It was at Roma that Mohamed really started to come into his own. He quickly became a key player for the side, finishing the season with 15 goals. He was also named Player of the Season.

Roma then signed Salah on a permanent deal for 15 million euros, although it would only last for one season before he was scooped up by Liverpool. The English side paid 42 million euros for the Egyptian striker, with add-ons that could raise the overall figure to 50 million euros. Salah scored on his debut and had an incredible first season, finishing with an incredible tally of over 40 goals across all competitions.

In 2018, Salah signed a new contract with Liverpool and followed up with another impressive season. The 2019-2020 season ended with Liverpool lifting the Premier League trophy – the first time they had done so in more than 30 years.

Relationships: Mohamed Salah married his wife Maggi in 2013. One year after their marriage, the couple welcomed their first child into the world. In 2020, Salah had a second child.

Brand Endorsements: Mohamed Salah has a long-standing partnership with Adidas. He typically wears Adidas boots during games, and he appears in a wide range of Adidas commercials. Salah also appeared in a Vodafone commercial in his home nation of Egypt. In addition, Mohamed appears regularly in the FIFA video game franchise.

Contracts: In 2018, Mohamed signed a 5-year deal with Liverpool that pays $15 million per year. Taking bonuses and incentives into account, that figure increased to $24 million per year due to his incredible performances. 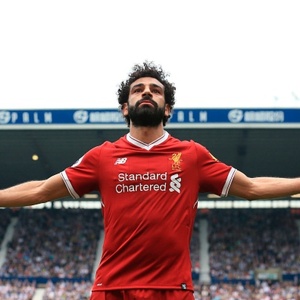