As an ethnic German and German national, Josef Klose, Miroslav's father, was an Aussiedler whose family had remained behind when Silesia was awarded to Poland after World War II. Josef decided to bring his family to Germany and in 1986, the then eight-year-old Miroslav joined his father in Kusel, Rhineland-Palatinate at the time knowing only two words of German. Klose is currently Germany's all-time top scorer with 71 goals. He won the Golden Boot at the 2006 World Cup in Germany, and also scored five goals in his debut World Cup in 2002. He scored four times in the 2010 World Cup, and during the 2014 World Cup he became the record scorer in World Cup history by netting his 16th finals goal in the 7-1 semi-final victory over Brazil; putting him ahead of Ronaldo to become the overall top scorer in the FIFA World Cup. Klose is a practicing Catholic and visited Pope Benedict XVI in March 2012. Klose and his wife Sylwia have twin sons, Luan and Noah. 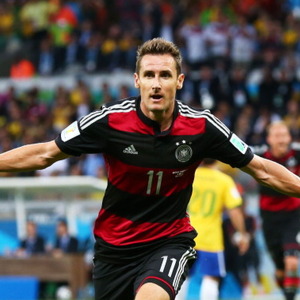