Michael Essien net worth and salary: Michael Essien is a Ghanaian midfielder who currently plays for AC Milan who has a net worth of $35 million. He was born in Accra on December 3rd 1982 in Accra, to Aba Gyandoh and James Essien. He graduated from St Augustine College and started his football career at liberty professionals FC, a local club in Ghana. However his successful career started in 1999 when he played for Ghana at the African Under-17 Championships and in the Under-17 World Cup in New Zeeland in the same year. European football scouts noticed the 1, 77 m middle fielding skills and a French club, Bastia signed him, where he scored six goals that season Michael Essien later transferred to Lyon where he shone more and helped the team win the 3rd and 4th string of their titles in Ligue 1. The France national Union Professional Footballers (UNFP) voted him the 2005 Player of the Year.

At 22yrs old in 2005 he signed for Chelsea FC for the second most expensive transfer deal for the club of £26m for five years. In August 2012 he signed an on-loan deal with Real Madrid and went t on to score two goals. Earlier this year on January 2014 he transferred to AC Milan an Italian Serie A Club.The fearsome tackler shows great versatility in the pitch playing both in the defense and midfield. This made him earn the nickname "Bison". He made his debut in the senior club, Black Stars in 2002 playing in the African Nations Cup. In 2017 Essien started playing for Persib Bandung. 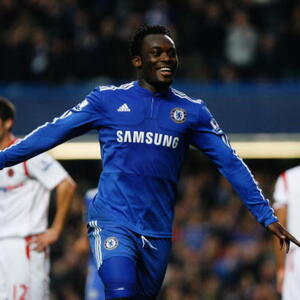