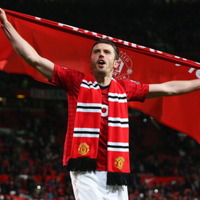 Michael Carrick Net Worth: Michael Carrick is an English footballer who has a net worth of $16.5 million dollars. Currently playing for Manchester United as a midfielder, he has made incredible 369 Premier League appearances along with 59 UEFA Champions League games as of January 2013. Born on 28 July 1981, in Wallsend, Tyne and Wear, England, Carrick started his football career in 1997 when he joined the youth team of West Ham United. Having won the FA Youth Cup, he made his debut as a senior West Ham United in 1999. However, Carrick was sent out on loan twice that season, to Swindon Town and Birmingham City respectfully. It was throughout the 2000-2001 season that he managed to secure a place in the first team. Having made over 150 appearances for the Hammers, he went on to play for their London rivals, .i.e., the Tottenham Hotspur club. Two years later, he put an end to his career with the Spurs in 2006, when joined Manchester United for a fee of £18 million. Being regular in the Manchester United first-team since his entry, Carrick made a name for himself as a key member winning the Premier League in 2006–07, their first title success in four years. Furthermore, he fetched his first League Cup medal in 2009, also during his Manchester United career. As for his international football career, it has been extensive as he has represented England at under-18, under-21, B and senior levels. Ever since he made his debut in 2001, Carrick has acquired 29 caps but he hasn't scored an international goal yet.