Michael Bradley net worth and salary: Michael Bradley is an American football (soccer) player who has a net worth of $6.5 million dollars. Michael Bradley was born in Princeton, New Jersey, and grew up in a soccer family. His father is Bob Bradley, the former Head Coach of the US Men's National Team.

Michael Bradley played for Sockers FC when he was younger, and then went on to train with the Under-17 Men's National team from 2002 to 2004. He turned professional when he was 16, signing with the MetroStars in 2004. An injury kept him on the bench during his first season, but he made up for lost time during his second season. He was then traded to Heerenveen, where he set multiple records, including breaking the record for the most goals scored by an American soccer player in a European first division. He has since gone on to play for Borussia Mönchengladbach, Aston Villa, Chievo, Roma, and Toronto FC. He has played for the US Men's National Team since 2006. In June 2014, Michael Bradley and the US team made it to the round of 16 in the 2014 World Cup. Bradley currently earns $6.5 million in salary playing for Toronto, therefore making him one of the highest paid American soccer players in the world currently. 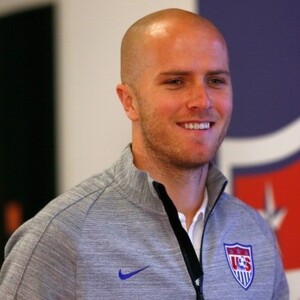