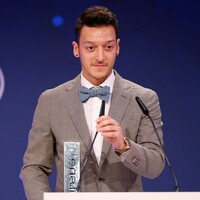 Mesut Ozil Net Worth and Salary: Mesut Özil is a German footballer (soccer player) who has a net worth of $120 million. Özil is considered to be one of the most creative and intelligent players in world football, and he has excelled at both the club and international level. After starting his career in the German Bundesliga, Mesut played for Real Madrid before transferring to Arsenal.

Although Özil quickly established himself as one of Arsenal's most important players, his form eventually dropped considerably and he was sidelined to the bench for an extended period of time. This prompted many fans of world football to ask "Whatever happened to Mesut Özil?" His disappearance has been a source of mystery, although various figures have their own theories as to the cause of his fall from prominence.

Outside of his club career, Mesut Özil has experienced considerable success as a member of the German national team. As an international player, Mesut has won a number of important trophies, including the 2014 FIFA World Cup. He was also named German Player of the Year on three separate occasions. After a disastrous 2018 World Cup saw the elimination of Germany in the group stages, Özil retired from international football and claimed that he had been the victim of discrimination by the German Football Association.

Early Life: Mesut Özil was born on October 15th of 1988 in Gelsenkirchen, West Germany. Born into a Turkish family, Mesut grew up speaking both German and Turkish – although his placement in a school with other ethic Turks made learning German difficult during his early years. Özil was raised as a Muslim, a religion that he still practices to this day. Özil started playing soccer at a very young age.

Career: After playing as a child for various clubs in Gelsenkirchen and Essen, Mesut was taken into the youth system of Schalke. Although he was seen as an incredible new talent for the German side, Özil refused a contract offer that included 1.5 million euros per year, claiming that the sum was insufficient. As a result, he was signed by Werder Bremen for 5 million euros in 2008. After spending a relatively short period with Werder Bremen, Özil was then snapped up by Real Madrid, who were among the many clubs impressed by the young German after watching him at the 2010 World Cup.

Real Madrid paid 15 million euros for Özil, and he quickly won a starting place in the team's lineup because of an injury to Kaka. He played in the Champions League that year for the first time, and it wasn't long before Los Blancos fans were giving him standing ovations. He finished that season with 25 assists, which was the best out of all the European leagues.

Jose Mourinho was a vocal admirer of Özil, and he relied on him as a playmaker from 2011 onwards. During this high point in Mesut's career, he was considered for the Ballon d'Or and he stated that he wished to end his career at Real Madrid. Despite this, Mesut agreed to join Arsenal in 2014 for about 42.5 million pounds. This made him the most expensive German player of all time.

Özil played well for Arsenal during the first season, earning another nomination for the Ballon d'Or and racking up plenty of assists. This continued for many years, and in 2018 he signed a contract extension with Arsenal that doubled his salary. This made him the club's highest-paid player in history. Later that year, he was not included in a number of key matches, leading many observers to ask questions. He was then continuously left out of the team's starting lineup throughout the next few years before the coronavirus caused the league to be suspended. However, Özil remained sidelined even when the season restarted later in 2020.

Style of Play: Mesut Özil is an incredibly well-rounded player who is capable of creating and finishing goal scoring opportunities. He plays as a creative attacking midfielder, although he can also play on the wing. Although he often acts as a playmaker, Özil's position is often difficult to define, with some observers dubbing him a "false 10" because of his tendency to drift toward the wing as a central midfielder.

Özil is also more than capable of playing as a striker, although he performs best when providing assists to other attackers. Mesut frequently sets records in terms of assists. Perhaps most of all, Özil is praised for his unwavering intelligence, seeing opportunities that everyone else misses. Despite all of this, Mesut has drawn criticism for his perceived lack of work rate and his inability (or unwillingness) to contribute to the defensive side of the game.

Relationships: In 2013, Mesut started dating a famous German singer named Mandy Capristo. The relationship lasted just one year before the pair split, with rumors spreading that Özil had been unfaithful. The pair appeared to get back together before breaking up finally in 2017. Following this, Özil started dating Amine Gulse, a model who had previously been named Miss Turkey. In 2019, the couple was married and they welcomed their first child into the world in 2020. To mark the occasion the couple funded 1,000 surgeries for underprivileged children.

Contracts: Mesut joined Arsenal in 2013 for 42.5 million pounds. He then signed a three-year contract extension with the team in 2017 that doubled his annual base salary from $12 million per year to $24 million. That's enough to make him one of the 10 highest-paid soccer players in the world. Later, he famously refused to accept a pay cut as an Arsenal player – a move that infuriated fans.

Real Estate: In 2016, Mesut completed a 10-million-pound purchase of a home in North London. This was during a period when Özil's future at Arsenal was in doubt, and the purchase of this residence was seen by the media as a sign that he intended to stay at the London club. After acquiring the six-bedroom, three-story home, Mesut made a number of renovations. He imported marble from Turkey to decorate his living room, and he created a home theater in which to play hours of the video game FIFA.

Mesut owns two esports teams, one that plays FIFA in the EA Sports league and another that plays Fortnite.