What is Megan Rapinoe's Net Worth and Salary?

Megan Rapinoe is an American professional soccer player who has a net worth of $5 million. Megan Rapinoe earned international fame as a member of the United States national team, winning gold medals at the 2012 Summer Olympics and the 2015 and 2019 FIFA Women's World Cups. Beyond soccer, Rapinoe is globally renowned for her activism, particularly her involvement with LGBTQ organizations.

After negotiating for a better deal in 2017, today members of the Women's team earn $4,950 for every tournament game they win.

Average women's players earn around $167,000 per year. Star players like Megan can typically earn around $400,000 per year from all sources. For the 2019 World Cup each US player earned the following amounts:

Under the same deal, if the US men ever win a World Cup, each player would take home $1.1 million.

Megan Rapinoe was born on July 5, 1985 in Redding, California to Denise and Jim. She has five siblings, including a fraternal twin named Rachael. Another sibling, her older brother Brian, inspired Rapinoe to begin playing soccer. Unfortunately, Brian started abusing drugs, and went through juvenile detention and a variety of state prisons. Along with her fraternal sister, Rapinoe used soccer as a means to escape the drug abuse that was common in the area. She continued to play throughout her youth with her father as her coach. As a teen, Rapinoe went to Foothill High School and played soccer with the local Elk Grove Pride team of the Women's Premier Soccer League. She also played for the under-14 Northern California state Olympic Development Program.

Along with her sister Rachael, Rapinoe enrolled at the University of Portland, Oregon. As a freshman in 2005, she guided the Portland Pilots to an undefeated season, ending with the NCAA Division I Women's Soccer Championship title. Rapinoe continued her success as a sophomore, becoming one of the country's leading scorers with ten goals; however, her season ended early due to an ACL injury. She suffered the same injury in 2007, ending her season after just two games. After recovering, Rapinoe bounced back in 2008, helping the Pilots to a 20-2 record.

Forgoing her final season of college eligibility, Rapinoe entered the inaugural Women's Professional Soccer Draft in 2009. Ultimately, she was selected second overall by the Chicago Red Stars. Rapinoe went on to be named to the league's All-Star Team and play in the WPS All-Star Game. In late 2010, after the Red Stars shut down operation, Rapinoe switched to the expansion team Philadelphia Independence. Rapinoe appeared in four games with the team before being traded to MagicJack; with MagicJack, she made it to the championship final, where the team fell to Philadelphia Independence. In 2011, it was announced that MagicJack was being shut down, leaving Rapinoe a free agent.

Following the announcement of MagicJack's cessation, Rapinoe signed with the Australian W-League team Sydney FC for two games. In the second of the games, she scored with seven minutes remaining, handing Sydney its first win of the season. Next, in the summer of 2012, Rapinoe played with the Seattle Sounders Women as she and other national team members prepared for the Summer Olympics.

In early 2013, Rapinoe signed to the French side Olympique Lyonnais for six months. She ended up playing in six regular season matches with the team, scoring two goals. Rapinoe went on to make her UEFA Women's Champions League debut in the quarterfinal against FC Malmö; scoring one goal, she helped Lyon advance to the semifinals. The team eventually fell to VfL Wolfsburg in the final. Returning to Lyon the next season, Rapinoe scored three goals in eight appearances, and then made four appearances during the Champions League. In the Round of 16, Lyon was eliminated. 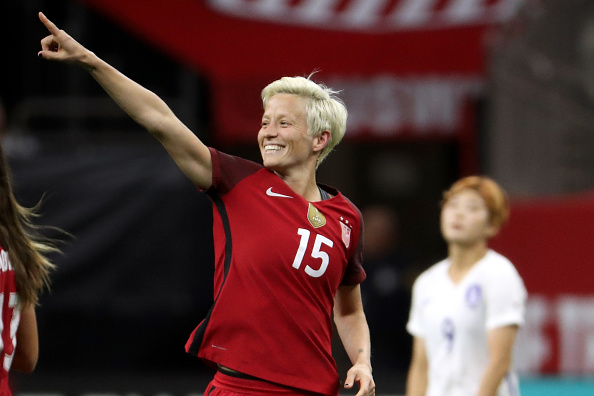 Back in the US, Rapinoe signed to Seattle Reign FC in 2013. Alongside her former teammate Hope Solo, she helped improve the team's subpar league record. In the 2014 season, Rapinoe made four goals and one assist to help Reign win the NWSL Shield, the league's regular season title. She subsequently helped the team beat Washington Spirit in the semifinal match. Reign ultimately lost to FC Kansas City in the championship final. In 2015, Rapinoe recorded her first professional hat-trick.

Thanks to her soaring international popularity, Megan Rapinoe has been able to sign a number of lucrative endorsement deals. Some of her biggest endorsement brand partners include:

These endorsement deals drive the vast majority of her annual earnings and net worth since she typically makes between $200 and $400 thousand per year from soccer salaries.

Early on in her international career, Rapinoe played for the US under-19 team, with which she competed in the 2004 FIFA U-19 Women's World Championship. Two years later, she made her debut for the senior US team in a friendly match against Ireland. Rapinoe was absent from the senior team in 2007 and 2008 due to ACL injuries; returning in 2009, she played in the Algarve Cup. In 2011, Rapinoe was named to the US roster for the FIFA Women's World Cup. She and the team went on to defeat Brazil in the quarterfinal match and France in the semifinal before falling to Japan in the final. One of Rapinoe's greatest victories came the next year, when she led the US team to a gold medal at the 2012 Summer Olympics in London in front of the largest crowd ever assembled for a women's soccer game at the Olympics.

Among the other highlights of her career on the US national team, Rapinoe helped the team win the 2015 and 2019 FIFA Women's World Cups. In the latter, she was awarded the Golden Boot as the tournament's top scorer, with six goals; she also won the Golden Ball for being the tournament's best player. Later, in 2021, Rapinoe helped the US team win the bronze medal at the Summer Olympics in Tokyo.

In the summer of 2012, Rapinoe publicly came out as lesbian in Out magazine. She also revealed that she was in a relationship with Australian soccer player Sarah Walsh. After the two separated, Rapinoe began dating singer-songwriter Sera Cahoone, to whom she got engaged in 2015. The pair ultimately called their plans off, and Rapinoe began a relationship with basketball player Sue Bird. Rapinoe and Bird announced their engagement in 2020.

Rapinoe is internationally recognized for her LGBTQ activism and philanthropy. She is involved with such organizations as Athlete Ally and the Gay, Lesbian & Straight Education Network. In 2019, Rapinoe and some fellow athletes founded a gender-neutral lifestyle brand called re-inc. Additionally, she has been vocal about gender discrimination and income inequality in soccer. 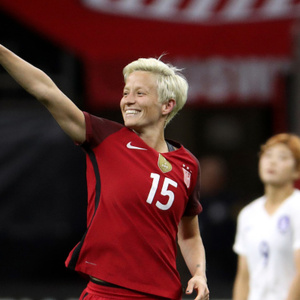