Mats Hummels Net Worth and salary: Mats Hummels is a German soccer player who has a net worth of $12 million. Currently, he plays as a central defender for the German Bundesliga club Borussia Dortmund, as well as on the German national football team. Mats Hummels was born in Bergsich Gladbach, West Germany on December 16, 1988.

He began his professional career in 2006, amassing five goals in 42 appearances for Bayern Munich II. He moved up to the main Bayern Munich club, but only made one appearance before being sent on loan to Borussia Dortmund in 2008-09. He netted just one goal in 25 appearances, then joined the club full time in 2009. For his Borussia Dortmund career, he's scored 20 goals in 227 appearances. Internationally, he's scored two goals in 29 appearances for Germany. With Borussia Dortmund, Hummels won the Bundesliga in 2010-11 and 2011-12; he won the DFB-Pokal in 2011-12; and the DFL-Supercup in 2013. He was also named to the ESM Team of the Year in both 2010-11 and 2011-12. Internationally, Hummels was a member of Germany's UEFA European Under-21 Football Championship winner in 2009. Hummels' family is also big in the sport-his father, Hermann, was a professional footballer and manager, and his younger brother Jonas currently plays for SpVgg Unterhaching. 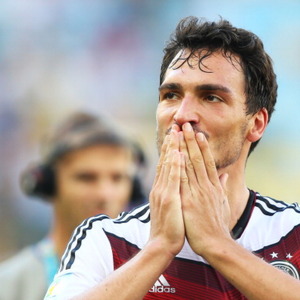