Marko Mitrovic Net Worth: Marko Mitrovic is a Swedish professional soccer player who has a net worth of $10 million. Marko Mitrovic was born in Malmo, Sweden in June 1992. He started playing soccer at four years old for the local team BK Olympic. From 1998 to 2008 he played youth soccer for Malmo FF where he scored more goals than he had game appearances.

In 2008 he joined Chelsea to play youth soccer. He scored seven goals in four games during the Under-16 Nordic Tournament and finished as top goal scorer. Mitrovic won the Golden Boot in the Cobham Cup but was injured. He helped his team win the FA Youth Cup but was continued to be hampered by injuries. In 2011 he was called up to Chelsea's senior side. He joined the Italian Serie B club Brescia Calcio in 2012. He scored the first goal of the season in 2013-14. In international soccer Marko has represented Sweden since 2007 and played for the Under-16, Under-17, and Under-19 sides. He played for Sweden in the Nordic Cup and finished as runner-up. Mitrovic is a goal-scoring striker. 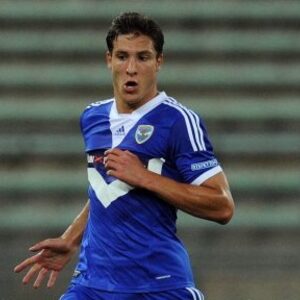