Mario Gotze Net Worth and salary: Mario Gotze is a German professional soccer player who has a net worth of $50 million dollars. Mario is probably most famous for his time as an attacking midfielder for the German Bundesliga club Bayern Munich, from 2013 to 2016, and for Borussia Dortmund, starting in 2019. He is also a representative of the German national team.

Mario was born in Memmingen, Germany in 1992. He started playing soccer at the age of eight. He signed with Borussia Dortmund as an attacking midfielder. In 2012 Gotze suffered a setback in the form of a hip injury. Still young, Mario Gotze is considered an up and comer in the sport of soccer. His speed, dribbling and technical skills, and play-making abilities have some thinking of him as one of Germany's best talents. With Borussia Dortmund, Gotze helped the team win the Bundesliga title in 2010-11. They also won the Bundesliga and DFB-Pokai double the next year. His 2013 team reached the UEFA Champions League Final. Bayern Munich bid $37 million and signed Gotze in 2013. This made Mario the second most expensive German player ever. Besides playing at midfielder, Gotze can also play a right or left winger, and has also played as a false 9. In his last year with Borussia Dortmund Mario Gotze scored 16 goals.

Gotze has been with the German national team since 2010. During the 2014 FIFA World Cup qualifying campaign, Gotze scored four goals, including the critical goal in overtime that allowed Germany to beat Argentina 1-0.. He signed a sponsorship deal with Nike in 2012 and has appeared in an ad for Nike Green Speed II. 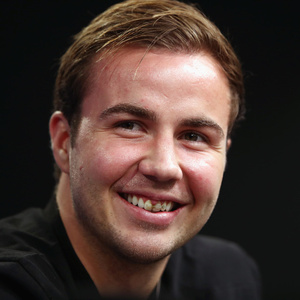