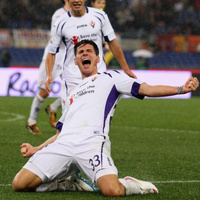 Mario Gomez Net Worth: Mario Gomez is a German professional football player who has a net worth of $25 million. Mario Gomez was born in Riedlingen, West Germany in July 1985. Gomez started playing soccer for SV Unlingen in 1990 as a youth. He later played for FV Bad Saulgau, SSV Ulm 1846, and VfB Stuttgart. In 2003 he was called up to the senior side from VfB Stuttgart II before joining VfB Stuttgart. With Stuttgart he became a champion in 2006-07 and scored 14 goals and seven assists to be named the German Footballer of the Year. In 2009 Gomez was transferred to Bayern Munich and signed a record transfer fee of $30 to $35 million Euro (depending on sources). In July 2013 he joined the Serie A side Florentina for a four year deal worth approximately $20 million Euro. Gomez is a striker and also plays internationally for the German team. He has represented Germany since 1999 and played on their Under-15, Under-17, Under-18, Under-19, Under-20, and Under-21 teams. Due to an injury he did not play on the 2014 Germany team that won the FIFA World Cup but he did receive a Bronze medal in the 2010 FIFA World Cup.