Marco Reus Net Worth and salary: Marco Reus is a German professional soccer player who has a net worth of $20 million. Known for his versatility, speed and technique, he currently plays for the German Bundesliga club Borussia Dortmund and the Germany national football team as an attacking midfielder or winger.

Reus was born in Dortmund, West Germany in 1989. In 1994 he started playing for his hometown team Post SV Dortmund. In 1996 he joined Borussia Dortmund's youth ranks. He played there until 2006 when he joined the under-19 team Rot Weiss Ahlen. Reus signed a four year contract in 2009 with Borussia Mönchengladbach. In 2012 he signed with Borussia Dortmund. This signing came with a transfer fee of $17.1 million. Marco Reus has been a member of the German national team since 2011. Reus' positions are attacking midfielder or winger. His best campaign came in 2012 when he scored 18 goals and recorded 8 assists. He helped Borussia Dortmund win the 2013 DFL-Supercup. He has also been recognized with the Footballer of the Year in Germany in 2012, as well as being placed on the 2013 UEFA Team of the Year. That same year he was ranked the fourth best football in Europe as declared by Bloomberg. During Germany's 2014 FIFA World Cup qualification stages Marco Reus scored five goals and also had three assists in only six matches. 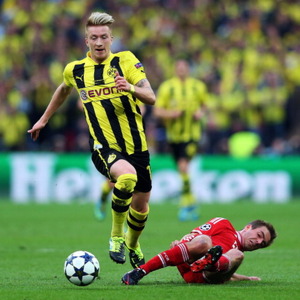