Manuel Neuer net worth and salary: Manuel Neuer is a German football player who has a net worth of $40 million. He is a goalkeeper for both the German national team and for Bayern Munich. He is known for his reflexes, shot stopping abilities, and distribution of the ball. His current salary is 6.25 million EUR per year.

After progressing through the youth teams, Neuer made his Under-21 debut in 2006 against the Netherlands. He won the 2009 UEFA European Under-21 Football Championship with the Germany national under-21 football team in Sweden and kept a clean sheet in the 4–0 win in the final against England. Neuer was selected as Germany's number one goalkeeper for the World Cup in 2010. During the group stages, he only conceded a single goal, which was a close range shot by Milan Jovanovic in the match against Serbia. He provided the assist for Miroslav Klose's opening goal against England, which ultimately led Germany to win the match 4–1. He played in all of Germany's World Cup matches apart from the third-place game against Uruguay, when Hans-Jorg Butt was given a spot in the starting lineup. He played every minute of every match in the qualification campaign for Euro 2012, helping Germany to secure ten wins out of ten games and top their group. After Germany's 3–1 away win against Turkey he was especially praised for his "sensational" performance. In addition to his work in football, Neuer also started a charity foundation for children, named the Manuel Neuer Kids Foundation. In November 2011, he won 500,000 EUR for charity in a celebrity edition of the German version of Who Wants To Be A Millionaire, Wer wird Millionär Neuer. He also did the voiceover for character Frank McCay in the German version of the 2013 Disney movie, Monsters University. 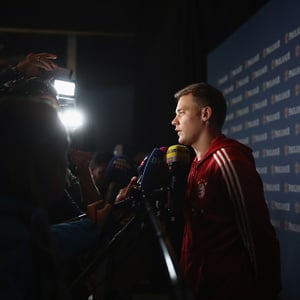