Luka Modrić Net Worth and Salary: Luka Modrić is a Croatian soccer player who has a net worth of $75 million. As of 2021, Modrić plays for Real Madrid in the Spanish La Liga. Observers generally see Modrić as one of the best midfielders of all time, and he is widely recognized as the greatest Croatian player ever to strap on a pair of soccer boots. After starting his career with Dinamo Zagreb as a 16-year-old, he eventually made his way to Tottenham and played in the English Premier League for many years.

After proving his quality, Luka joined Real Madrid in 2012. He quickly became an integral part of "Los Blancos," winning many Champions Leagues and other titles with the Spanish club. As an individual player, Modrić has won multiple awards for "Best Midfielder," as well as the coveted Ballon d'Or. In addition, Luka has been an important player for the Croatian national team, which he captains. The highlight of his international career was probably the 2018 World Cup, when he led Croatia to the final, although he ultimately lost against France.

Early Life: Luka Modrić was born on September 9th of 1985 in Zadar, SR Croatia, SFR Yugoslavia. Luka was initially raised in a stone house owned by his grandfather and passed the time by shepherding goats as a five-year-old. In 1991, his life was forever changed by the Croatian War of Independence. His family was forced to flee, but not before Luka's grandfather was lined up and shot by Serb rebels. His family home was then burned to the ground, but luckily Modrić's family was already long gone.

Over the next few years, Luka's family lived as refugees, staying in hotels while his father joined the Croatian army as an aeromechanic. Luka played football for the first time in the city of Zadar while thousands of bombs fell around him on a daily basis. Football was a means of escape for the young boy. Eventually, Luka's potential became clear. The family scraped together what little money they had and funded his soccer training at a sports academy.

Career: Modrić began his playing career with NK Zadar before moving to Dinamo Zagreb as a 16-year-old. Initially, he was loaned out by the club and played in the Bosnian Premier League. During this period, Luka refined his style of play and won the Bosnian Premier League Player of the Year Award at the age of 18. After proving himself, he was recalled to Croatia and broke through with Dinamo Zagreb's first team. In 2008, Modrić agreed to move to Tottenham Hotspur for a transfer fee of 16.5 million pounds.

Although Luka took a while to establish himself in England due to his lightweight frame and knee injuries, he eventually proved his critics wrong. When Harry Redknapp took over as the new manager of Tottenham, Modrić was put into a more natural position as a central midfielder. This was when he first started to establish himself as one of the best playmakers in the world. Redknapp built the entire team around Luka, and the Croat signed a six-year contract extension in 2010.

Despite this, Luka would only spend two more years at the club before it was clear he was destined for greater things. Chelsea determinedly pursued Modrić, but it was Real Madrid who ended up snatching the Croatian away to Spain. In 2012, Real Madrid paid 30 million pounds to sign Modrić, who would become one of the most influential players to ever wear the famous white jersey. Just like his arrival in England years, Luka failed to settle in at first while playing under manager José Mourinho.

By 2013, he had won a place in the starting eleven. Despite early criticism from the Spanish press, he was considered the "best midfielder in Spain" by numerous observers after two more years of impressive play. By 2015, he was considered one of the best players in the world, and his central role with Real Madrid increased under new manager Zinedine Zidane. In 2017, he won the Ballon d'Or and the Champions League (his fourth Champions League title with Real Madrid).

Personal Life: Luka values his privacy, and he tends to keep his family life away from the prying eyes of the media. In 2010, he married a woman named Vanja Bosnić. That year, the couple welcomed their first child into the world. Over the next seven years, they had two more children. The family practices Roman Catholicism.

Legal Issues: When former Dinamo Zagreb executive Zdravko Mamić was on trial for tax evasion, Modrić took the stand as a witness and detailed his various contracts with his former club. Unfortunately, Modrić allegedly gave the wrong dates for certain key events, and he was then charged with perjury. This caused considerable controversy, as Luka insisted he was innocent while the public opinion was split among Croats. Some stood behind him, while others saw him as being part of a widespread corruption scandal. In 2018, the perjury charge was dismissed.

Real Estate: In 2019, it was reported that Modrić had purchased a home in Madrid worth about 12 million euros. The home sits on a plot of land that spans 10,000 meters, and the house boasts about 2,700 square meters of living space. There are nine bedrooms, six of which are located on one floor. Another notable amenity is a home cinema with 18 seats. Down below, there is a wine cellar made completely of glass. Luka is reportedly a true family man, and he has created an entire room dedicated to his kids, which features a climbing wall. Outside, the home has a garage that can fit up to ten cars. The residence also comes complete with a sprawling garden, a swimming pool, and various sports courts. 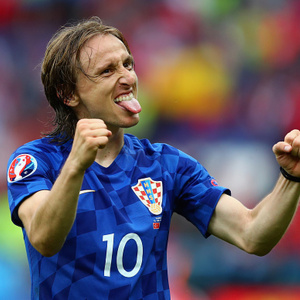