Gustavo began his career as a left back, but played mostly as a defensive midfielder in Germany, though he also played centre back. Dias is known as a quick runner and for his precise passing, making him one of Brazil's weapons in the World Cup tournament. His career as a footballer (soccer player) has seen him playing for the youth team Universal FC Rio Largo; the senior teams Corinthians Alagoano (2007-08), CRB (loan)(2007), 1899 Hoffenheim (loan)(2007-08) and again 2008-11), Bayern Munich (2011-13) then on to his current team VfL. Gustavo made his debut for Brazil national team on August 2011, coming on as a second-half substitute in a friendly match against Germany. He was a member of Luiz Felipe Scolari's squad for the 2013 FIFA Confederations Cup and played the full 90 minutes as Brazil defeated world champions Spain 3–0 in the final at the Estádio do Maracanã. During the 2014 FIFA World Cup in Brazil Luis Gustavo Dias was infamously suspended from the game against Colombia. Dias became engaged to his girlfriend Milene on Christmas day in 2010, while on holiday in Brazil. He cites his mother as a big source of inspiration because of her dream that he would one day succeed as a player. Dias' mother passed away when he was just 16 years old. 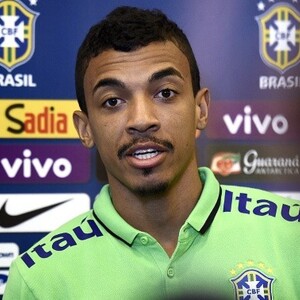