Luis Suarez net worth and salary: Luis Suarez is a Uruguayan soccer player who has a net worth of $70 million. Between June 2017 and June 2018, Luis Suarez earned $27 million, of which $20 million was salary and $7 million was from endorsements. He plays at the forward position. Luis Suarez was born in Salto, Uruguay on January 24, 1987.

His senior career began at Nacional in 2005, where he played in 34 matches, scoring 12 goals. In 2006, he moved on to Gronigen, playing 37 matches and scoring 15 goals. From there he joined Ajax in 2007, staying with the club until 2011. Ajax has been his most successful stop to date, scoring 111 goals in 159 appearances. In 2011, he joined Liverpool, and has scored 71 goals in 113 matches as of January 2014. Internationally, Luis Suarez has been playing for the Uruguayan team since 2007. As of the end of 2013, he's scored 39 goals in 71 appearances. Over the course of his career, Luis Suarez has received a number of accolades. At the club level, he won the League Cup during the 2011-12 season with Liverpool, and the KNVB Cup in 2009-10 with Ajax. He also won the Copa America in 2011 Uruguay. Luis Suarez has also won a number of individual awards, including the FSF Player of the Year in 2013, the PFA Team of the Year in 2012-13, Copa America Player of the Tournament in 2011, the Eredivisie Golden Boot in 2009-10, the KNVB Cup Top Goalscorer in 2009-10, and the Dutch Footballer of the Year in 2009-10. In June of 2014 during the World Cup, FIFA officially charged Suarez with biting Italy defender, Giorgio Chiellini, during the match between Italy and Uruguay. He was banned from all "football-related activities" for four months which ruled him out of the rest of the World Cup and the start of the domestic season. Allegedly, this was not the first time Suarez has bitten another player. 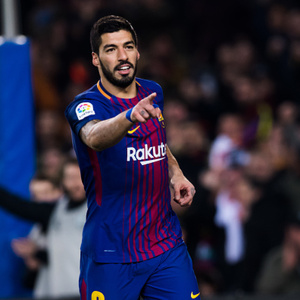