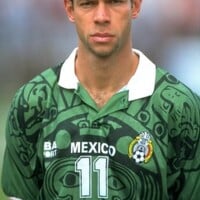 Luis Roberto Alves Net Worth: Luis Roberto Alves is a Mexican retired professional soccer player who has a net worth of $3 million. Luis Roberto Alves was born in Mexico City, Mexico in May 1967. Luis is the son of former Brazilian soccer player Jose "Zague" Alves. Luis was often referred to as "The Mexican" while playing soccer as a child in Brazil. He started off his professional career in 1985 playing for the team America. While playing for America he won the La Primera Division in 1985, 1987, and 1988. He also won the Champions' Cup in 1987, 1991, and 1993. With America he also won the Campeon de Campeones in 1987 and 1988, CONCACAF Cup in 1992, and Copa Interamericana in 1991 and 1993. In 1996 he joined Atlante before going back to America in 1997 and then back to Atlante in 1998. From 2002 to 2003 he played for Necaxa before finishing his career with America in 2003. Alves also represented Mexico in international play from 1988 to 2002 appearing in 84 matches and scoring 30 goals, making him the 6th highest Mexico goal scorer of all time. He won a Gold medal at the 1999 Pan American Games and finished 3rd at the FIFA World Club Championship in 2000. Luis is married to Mexican news anchorwoman Paolo Rojas.